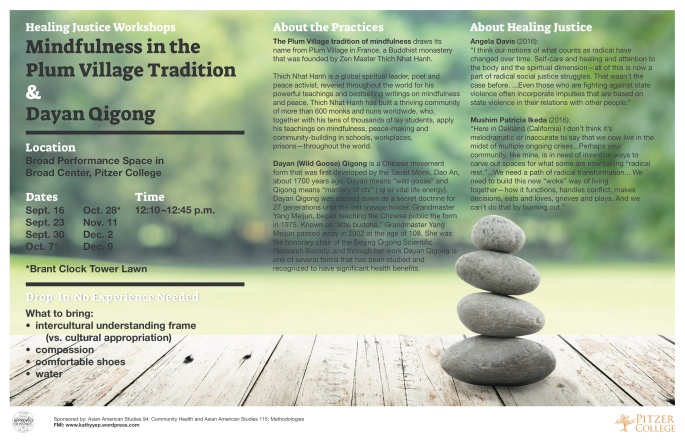 Facilitated by Prof. Kathy Yep and students from ASAM94:Community Health and ASAM115: Methodologies

WHAT IS MINDFULNESS ?  Conscious of systemic suffering and injustices, we aim to practice mindfulness in ways that create a more just, peaceful, and sustainable world and does not cause harm to others. (M.P. Ikeda)

ANGELA DAVIS (2016): “I think our notions of what counts as radical have changed over time. Self-care and healing and attention to the body and the spiritual dimension—all of this is now a part of radical social justice struggles. That wasn’t the case before. …Even those who are fighting against state violence often incorporate impulses that are based on state violence in their relations with other people.”

MUSHIM PATRICIA IKEDA (2016): “Here in Oakland (California) I don’t think it’s melodramatic or inaccurate to say that we now live in the midst of multiple ongoing crises. … Perhaps your community, like mine, is in need of inventive ways to carve out spaces for what some are now calling “radical rest.”… We need to build this new “woke” way of living together—how it functions, handles conflict, makes decisions, eats and loves, grieves and plays. And we can’t do that by burning out.”

WHO:  Open to the public, no experience necessary.

Dr. Yep has practiced mindfulness in Thich Nhat Hanhʻs Plum Village tradition since 1996. Zen Master Thich Nhat Hanh (pronounced tik-not-hawn) is a global spiritual leader, poet and peace activist, revered throughout the world for his teachings and bestselling writings on mindfulness and peace. He has survived three wars, persecution, and more than thirty years of exile from his native Vietnam, when he was banned by both the non-Communist and Communist governments for his role in undermining the violence he saw affecting his people. Thich Nhat Hanh has built a thriving community of over 600 monks and nuns worldwide, who, together with his tens of thousands of lay students, apply his teachings on mindfulness, peace-making and community-building in schools, workplaces, prisons – throughout the world. More information can be found at PlumVillage.org.

Qi Gong (pronounced chee-gong): Dr. Yep was trained by Master Paul Li and Dr. Bingkun Hu starting in 1994. Practicing for over twenty years, she has facilitated small qi gong groups in California. Dayan (Wild Goose) Qigong is a Chinese movement form that was first developed by the Taoist Monk, Dao An, about 1700 years ago. Dayan means “wild goose” and Qigong means “mastery of chi.” (or vital life energy). Dayan Qigong was passed down as a secret doctrine for 27 generations until the last lineage holder, Grandmaster Yang Meijun, began teaching the Chinese public the form in 1975.